← more from
Night Time Stories
Get fresh music recommendations delivered to your inbox every Friday.
We've updated our Terms of Use. You can review the changes here. 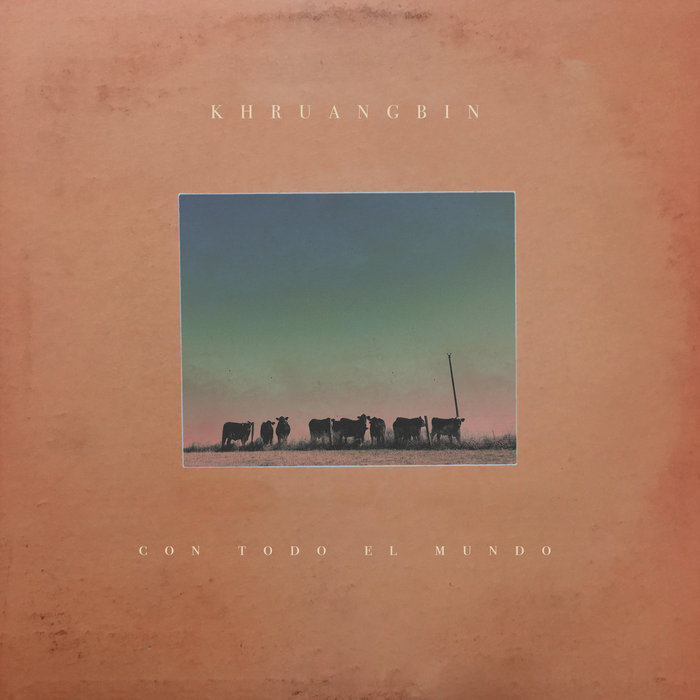 Cam Such talent and great tone , wow ... one of my favourite discoveries in awhile ... , looking forward to the new one with Leon Bridges to ... man that b side track is smoking .

feijoa_mower Khruangbin grows a sonic landscape as sparse and beautiful as the Texan desert they recorded this album in Favorite track: Maria También.

Formed of Laura Lee on bass, Mark Speer on guitar, and Donald “DJ” Johnson on drums; Khruangbin’s sounds are rooted in the deepest waters of world music infused with classic soul, dub and psychedelia. Their 2015 debut album ‘The Universe Smiles Upon You’ was heavily influenced by 60’s and 70’s Thai cassettes the band listened to on their long car journeys to rehearsal in the Texan countryside. ‘Con Todo El Mundo’ takes inspiration not just from South East Asia but similarly underdiscovered funk and soul of the Mediterranean and the Middle East, particularly Iran.

‘Con Todo El Mundo’ is in part dedicated to Laura Lee’s Mexican-American grandfather, a formative influence on the bassist. She says, "My grandpa would always ask me 'Cómo me quieres?' (how much do you love me?) And he'd only ever accept one response: 'Con todo el mundo' (with all the world). He created his own world to live in. Khruangbin is the world we’ve created.”

Though outwardly unassuming (but no less stylish), the trio’s diverse backgrounds aligned with a shared worldview and passion are at the heart of what makes Khruangbin tick. Their desire in representing international culture is notable given the climate and agenda in certain areas of the US. In some respects it's throwing back a compliment by reinterpreting artists of other countries reinterpretations of US-based music, which again drew influence from the world. Throughout ‘Con Todo El Mundo’; Laura Lee’s melodic low-end theory, Mark’s lyrical, free-role guitar lines, and DJ’s ever-steady, ever-ready backbeat form something greater than their parts. A statement that crosses languages, ages, cultures and borders.

Opener ‘Cómo Me Quieres’ sets the tone with its exotic, spacious, slow-motion funk while in antithesis the album’s first single ‘Maria También’ is filled with urgency and attitude. ‘August 10’ is a classic Khruangbin track, infused with their signature bass-heavy sound, while also introducing new elements to their chemistry. There’s time for solid disco-funk in the form of ‘Evan Finds The Third Room’ and the band even finds space to nod to P-Funk with a chant towards the end of the evolving jam ‘Lady and Man’. Closing the album, ‘Friday Morning’ - “a song about jumping into love” - skips between laid back Isley Brothers-esque vibes via delicate tempo changes into gentle hymnal passages.

Since the release of ‘The Universe Smiles Upon You’, Khruangbin have spent the past two years playing non-stop worldwide. From a European tour with Father John Misty to supporting Maribou State at Koko, a string of festival dates at Glastonbury, SXSW, Dimensions, Gottwood, Love International, The Great Escape, The Downs with Massive Attack, a joint US tour with Chicano Batman and extended headline excursions; Songkick estimates Khruangbin played around 100 gigs in the past year. The band count it at a fair few more. As a nod to their travels, Laura and Mark have been presenting a weekly “AirKhruang” DJ set live each Friday on their Facebook page, where the pair play a selection of music by artists from a particular city.

The trio continue to play live around the world throughout 2018 starting with a UK tour to follow the album release. A vibe-synchronous soul-unit travelling the planet, honing their craft, absorbing the sights, sounds and feels from cultures across the globe, processing them through the Khruangbin filter and gifting the result back...with all the world.

Khruangbin is a three-piece band from Texas, formed of Laura Lee on bass, Mark Speer on guitar, and Donald Johnson on drums. Taking influence from 1960's Thai funk - their name literally translates to "Engine Fly" in Thai - Khruangbin is steeped in the bass heavy, psychedelic sound of their inspiration, Tarantino soundtracks and surf-rock cool. ... more

Bandcamp Daily  your guide to the world of Bandcamp

Frayle's Gwyn Strang and Sean Bilovecky join the show to talk about their cathartic new album.